Breastfeeding benefits aren’t just limited to the baby but Mamas as well. In this article, we’re rounding up all the reasons why breastfeeding is a journey worth embarking on despite the breastfeeding pain and sleepless nights.

What is breastfeeding? In a nutshell, it’s when a Mama feeds her baby breastmilk. It can be directly from the breast or expressed by hand or using a breast pump. For the World Health Organization (WHO), on the other hand, breastfeeding is a way to “ensure child health and survival.”

Breastfeeding is one of the most natural things in the world. In fact, babies are born with a natural instinct to breastfeed.

Is it a walk in the park, considering babies seem to be hard-wired for breastfeeding? That isn’t the case, Mamas. It involves you learning from your baby and vice-versa.

When Should You Start Breastfeeding?

For breastmilk meets a baby’s nutritional needs, the WHO recommends that breastfeeding be initiated during the first hour of life and continued during the first six months of life. According to the Ministry of Health, skin-to-skin contact is also essential when initiating breastfeeding and should be provided unless there is an unavoidable medical reason. 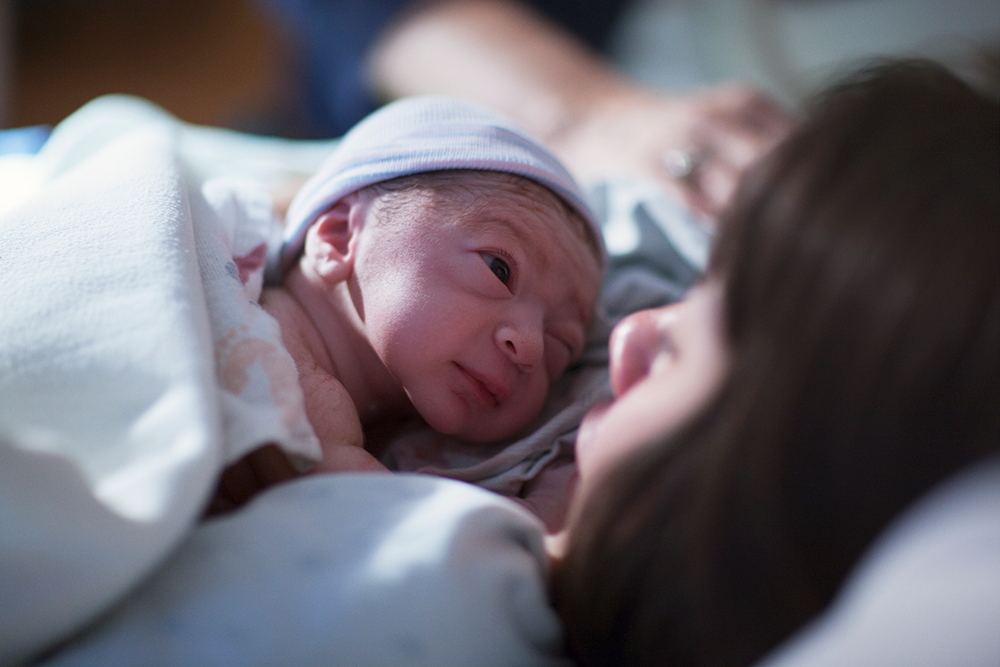 WHO also recommends breastfeeding up until two years of age and beyond. This is because breastmilk is still able “to provide up to half or more of a child’s nutritional needs during the second half of the first year, and up to one-third during the second year of life.” 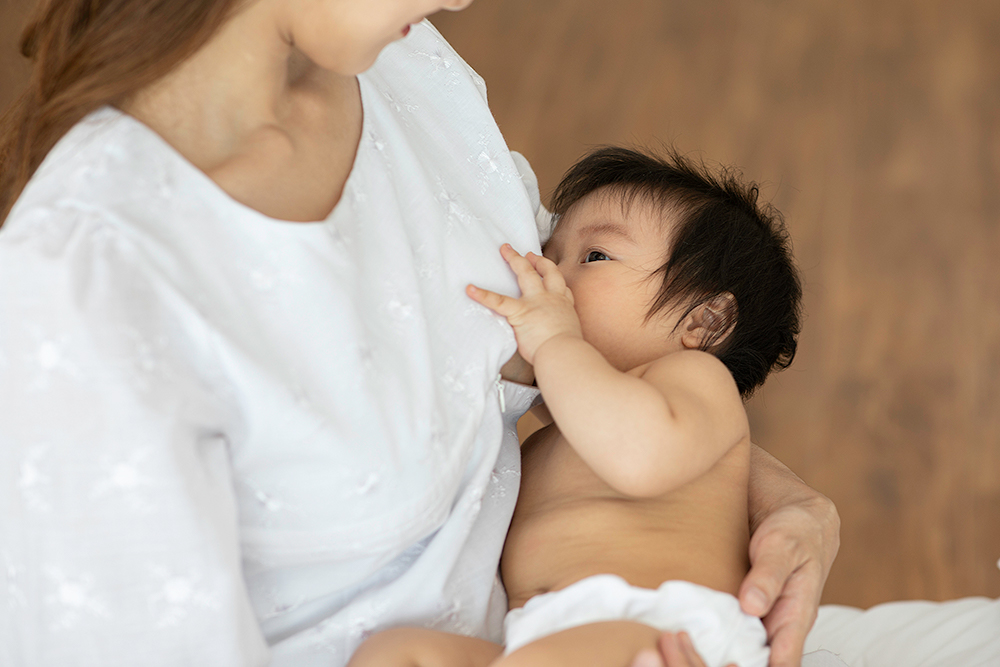 Breastfeeding is no easy feat, but you can be better prepared for what lies ahead with these tips: 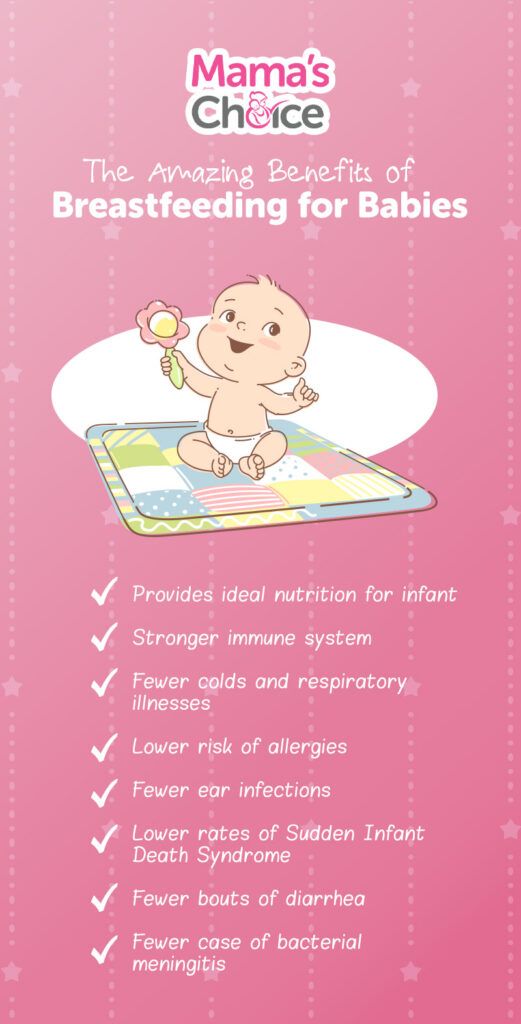 The WHO describes breastmilk as the perfect food for infants. Safe, clean and always at the right temperature, breastmilk contains all the nutrients a baby needs for the first months of life.

Colostrum is the first milk Mamas will produce before it becomes transitional and mature. Thicker, more yellow and jam-packed with nutrients (this is why colostrum also goes by the name liquid gold!) promote growth and health in your newborn.

And even more impressive is that breastmilk will change when a baby is sick. Researchers believe that a Mama’s baby can know this through the baby’s saliva. How amazing is that?

3. Breastfeeding may reduce the risk of diseases

Did you know that the chances of a breastfed baby developing illnesses and diseases are lower? These include asthma, bacterial meningitis, sudden infant death syndrome, pneumonia, gastroenteritis, ear infections and even childhood cancers.

A study published in the Pediatrics journal of The American Academy of Pediatrics highlighted that babies who drink breastmilk directly from the breast had lower rates of obesity.

One reason is that, with direct latching, babies are less likely to overfeed, unlike bottle feeding, where Mamas or caregivers will be more likely to encourage babies to finish a bottle; directly feeding on the breast places no pressure on the baby. When they’re full, they will stop nursing.

Although it does not mean that formula-fed babies can’t be more intelligent than breastfed babies, several studies have shown that they have slightly higher IQs. For example, in a Brazil study, experts have pointed out that those who breastfed for at least a year performed better in intelligence tests. 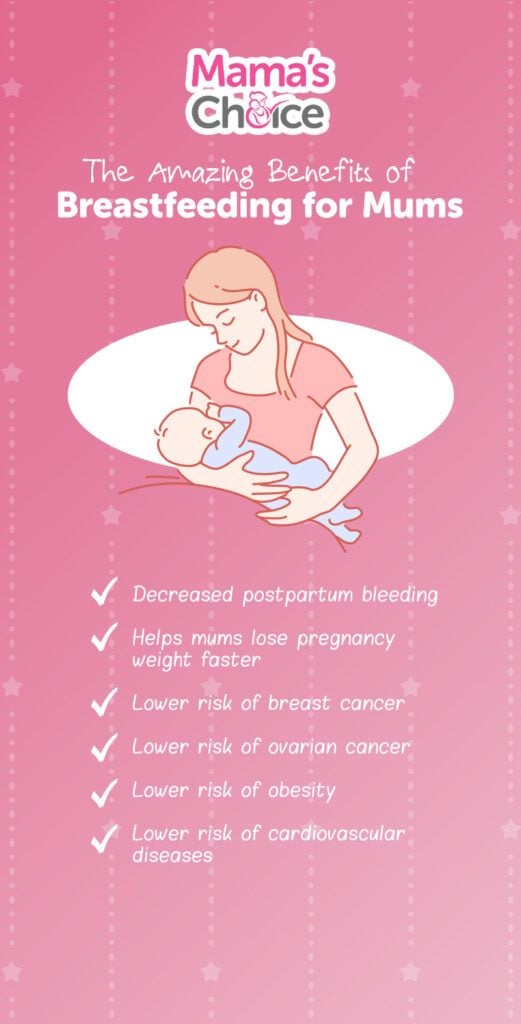 Breastfeeding may look effortless, but it burns about 500 calories a day. Not only does breastfeeding stimulate the release of oxytocin which triggers the let-down reflex, but it also causes the uterus to shrink and return to pre-pregnancy size. Plus, it also reduces postpartum bleeding. As such, it’s no wonder why breastfeeding Mamas seem to lose their postpartum weight faster.

Breastfeeding benefits don’t just cover the physical aspects. According to a study, Mamas who breastfeed are less likely to experience postpartum depression.

3. Breastfeeding lowers the risk of breast and ovarian cancers

As we mentioned earlier, breastfeeding bolsters a baby’s immunity and protects them from certain diseases. The same goes for Mamas, as breastfeeding lowers the risk of breast cancer by as much as 4.3% for every year of breastfeeding.

4. Breastfeeding reduces the risk of diabetes

Type 2 diabetes, in particular, can be prevented by almost 50% of Mamas who breastfeed for longer than two months. And for Mamas who continue to breastfeed past the 5-month mark, a more than 50% reduction is noted.

5. Breastfeeding is good for the heart—literally and metaphorically

Breastfeeding forges a connection between a Mama and her baby is indescribable. Much of that can be owed to the hormones oxytocin and prolactin that helps Mama feel less stressed and more calm, confident and optimistic.

But other than the emotional benefit, breastfeeding also lowers the risks for hypertension and cardiovascular diseases by 20-30%. This breastfeeding benefit applies to Mamas who breastfeed for at least four months.

Here at Mama’s Choice, we believe breastfeeding is a personal decision. We’re here to help you learn the facts about breastfeeding so you can make an informed decision for yourself and your baby. 🙂

Did you find this article about breastfeeding benefits helpful? Then, click the share button and help a fellow Mama make the right choice in her journey!

A mama of one energetic toddler, Hanna likes to read books, watch baking shows, and play video games when her little one is asleep.